HAVE ADVOCATES OF MIGRATION WON AND HAS MEDIA PREDOMINANCE SHIFTED? – Nézőpont Intézet
Skip to content 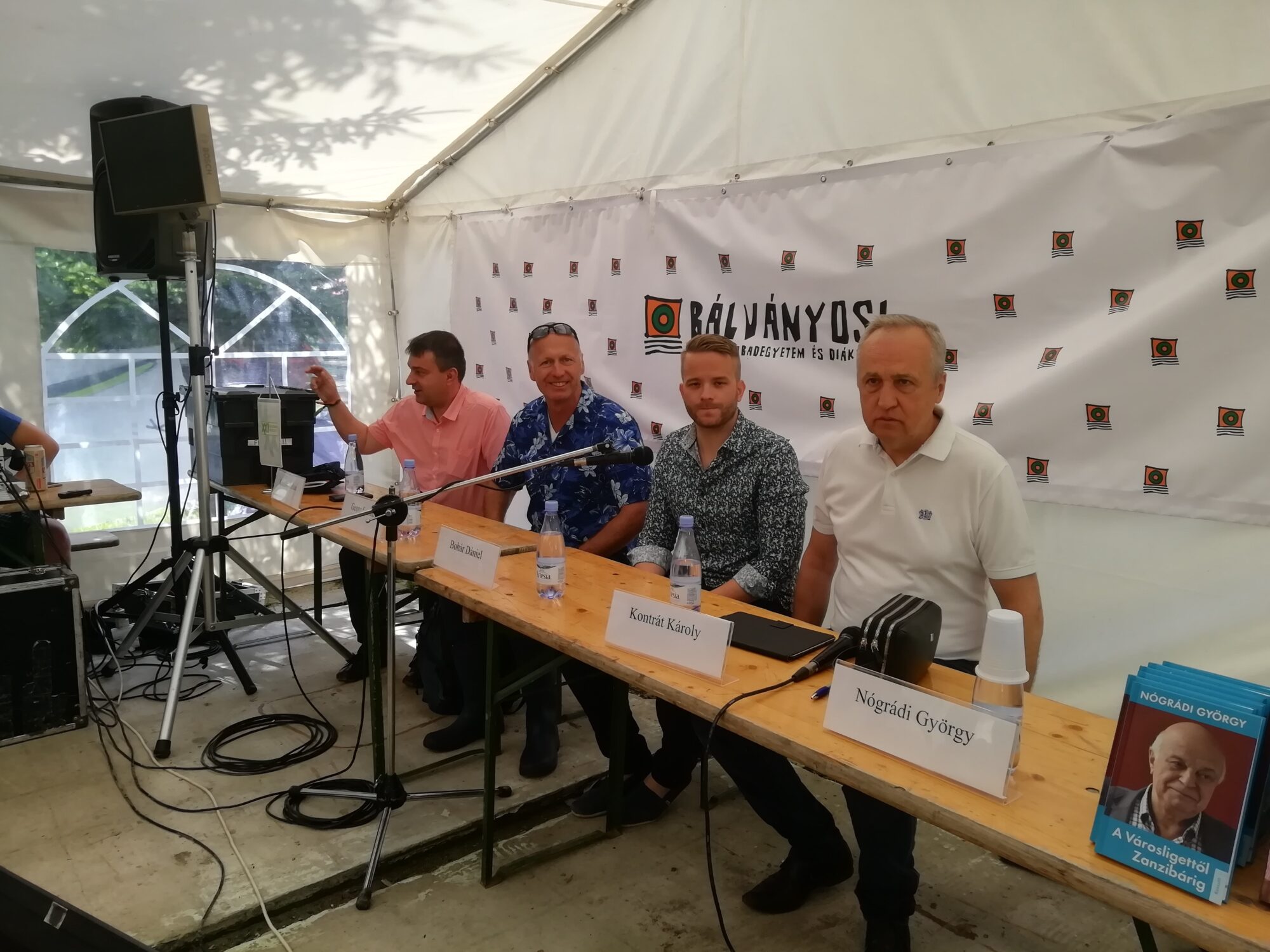 “Right-wing media started out at an unfair disadvantage in the 1990s, as  former Communists appeared in the Hungarian public wearing a disguise of professionalism, and the Right lost the non-existent media war there and then”.

Said Medianéző Centre Director Levente Boros Bánk at a roundtable discussion at Balvanyos Free University and Youth Camp. Also there, in another panel discussion, Georg Spöttle talked about how the only way to solve the problem of migration was to continue to protect European borders and provide assistance at the source of the problem.

As Levente Boros Bánk explained at a roundtable discussion entitled “Has Left-Liberal Media Predominance Shifted in Hungary”, Communists hiding behind hypocritical professionalism gave Journalism the stigmas, and this is the position from which Hungarian media started out following the change of regime. Gergely Huth, editor-in-chief of Pesti Srácok said that the media of the time was conceived in a swamp. In regard to the Central European Press and Media Foundation (CEPMF) he emphasised that opening a new chapter in the matter was the right thing to do. He said he was confident that advertisers would see potential in the right-wing press, as most of the ads currently appeared in the left-liberal media.

“Neither the Antall Government nor the First Orban Government paid enough attention to the media. This changed a great deal after 2002 when the role of the media was recognised”, replied László Néző to the moderator’s question as to whether it was predetermined that the media became left-liberal after the post-communist transition. From the mid-1990s, right-wing media were in a very bad position until the merger of the newspapers Hungarian Nation and New Hungary, and the launch of Chain Bridge Radio and Hír Television. According to László Néző, it is very interesting that the Conservative side had managed to achieve this from an opposition.

Changes in the 1990s and the rise of social media determined not only the media market but also advertising habits, said Fidesz Digital Director Magor Dukász. Currently there is a struggle for people’s attention with media and individuals in stiff competition. The media comes up against the time spent on social media, rather than their competitors. The new equilibrium is interesting in this race that will further intensify.

“Let’s face it, independent medium and independent journalists don’t exist”, ‘said Levente Boros Bánk. The Right’s media shortage was a learning process, as the Left was in the right position, moving from  chair to the other, with right-wing journalism starting at an unfair disadvantage. The 2002 defeat taught the conservative political side to pay attention to the media. The media, according to Levente Boros Bánk, is an attention attracting tool of politics to convey its message. In regard to Facebook he said, “They’re not with us. Don’t think that just because we have all the resources, we can win a match on that pitch”. Referring to an earlier research by the MNK, he said that on television and the Internet, the left liberal media was still stronger, and that the real task was to counteract this.

Have Pro-Migration Forces Won in the EU?

“NGOs work hand-in-hand with criminal organisations, people smuggling is a huge business”, stressed Nézőpont Intézet analyst Georg Spöttle at a roundtable discussion entitled Have Pro-Migration Forces Won in the EU. As he explained, people smugglers seduce their targets with the promise of a better life. According to Spöttle, the only one way to solve the problem of migration was to continue to protect European borders and provide assistance at the source of the problem instead, as that’s where locals needed to be paid realistic incomes. Spöttle said that the German state had spent USD100 billion on migration since 2015, but had that money been spent on the source of the problem, much more would have been done for the people there. The money had been spent but no solution had been found, the analyst pointed out. As he emphasised, money had to be invested wisely, proper living conditions had to be be created so that the people living there would not leave the war-torn area in hope for a better life. Security is the highest good amid more than 700,000 crimes committed in Germany by people of migrant background.

“People living there are used to death, gunfire and war conflicts, while we are used to sanctions if we do not respect the law”, said Századvég Intézet regional manager Zoltán Kiszelly explaining the growing number of crimes in Germany. The analyst said that in the course of history, German political leadership often forced decisions on the people while disregarding their views, as was the case with migration.

Gun Powder Must Be Kept Dry

“Migrants arriving on the Mediterranean Sea should not be allowed in and must be returned to their place of origin”, cited the decree of the European Council from June 2018 Károly Kontra, parliamentary State Secretary at the Ministry of the Interior. As he said, this decree was strictly observed by Hungary. The Secretary of State reminded everyone of last week’s initiative by Germany, France, Finland, Luxembourg and Portugal to bring migrants from the Mediterranean Sea ashore and distribute them temporarily between EU Member States. Hungary, however, along with the V4 countries, insisted on the European Council’s decision. According to the V4s, transporting immigrants ashore would only encourage the smugglers. Hungary is not an attractive destination for migrants due to its strong border barrier, and still 6,100 cases of illegal border crossing had to be sanctioned. The Secretary of State urged everyone to “keep the gunpowder dry”, because if Hungary together with the V4s had managed to prevent Frans Timmermans from becoming the President of the European Commission, then the fight against anti-immigration forces would also be successful.

“In the West, conservative politics are not attractive enough for young people, but Greens have been able to appeal to young people in Germany”, said Georg Spöttle, an analyst from Nézőpont Intézet. As he explained, the Greens were anti-nuclear, packing pro-gender and pro-immigration ideologies into environmentalism, which the next generation would have to swallow as a bitter pill.

According to György Nógrádi, new President of the European Commission Ursula von der Leyen had an independent personality and was not attached to Chancellor Angela Merkel. As he said, Angela Merkel was no longer a queen in Europe, and her only desire was to be left alone until 2021. A new leadership was coming, giving us reason to hope that the anti-immigration forces would win, said the security policy expert.