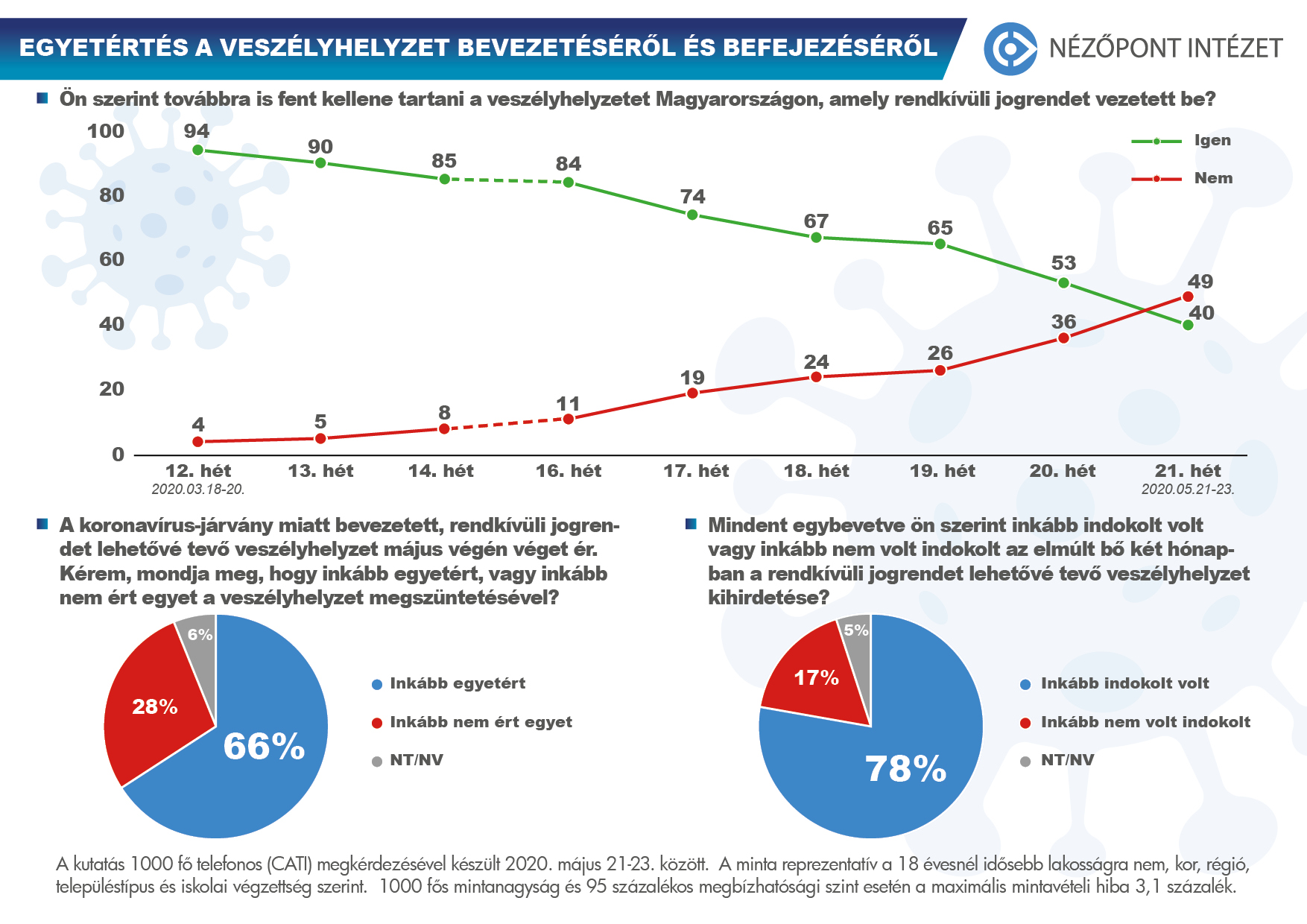 Even in retrospect 78 percent of Hungarians think  that the Hungarian government acted right when initiated the extension of the state of emergency in March, but now 66 percent also agree with the government on ending the corresponding special legal order, reveals a telephone interview based opinion poll conducted by Nézőpont Intézet between Thursday and Saturday last week.

78 percent of voters, a slightly higher proportion than in previous weeks, indicated that they were satisfied with the Hungarian government’s “measures against the spread of the coronavirus” (18 percent disagreed). The introduction of the state of emergency enabling a special legal order was also a factor in the widespread satisfaction. In mid-March (Week 12), 94 percent of Hungarians said they agreed with the emergency measure provided by the constitution, and at the end of March (Week 14), at the time of the legal extension of the state of emergency, 85 percent still supported its prolongation. This support fell to 40 percent last week, and 49 percent of Hungarians even said that there was no longer a need for the special legal order. This makes opponents of the state of emergency a majority for the first time since March, without the issue becoming an anti-government demand. Following the Hungarian Prime Minister’s initiative, 40 percent of pro-government voters no longer consider maintaining the state of emergency necessary.

Moreover, when asked whether the emergency should be called off (not whether it should be maintained), 66 percent of Hungarians already agree with such a move and 61 percent of pro-government voters support it. However, this no longer makes much difference, as the special legal order will expire at the end of May anyway, and Viktor Orbán, who had initiated the move before the opposition’s claim was made, and his opponents are in agreement over the issue.

Politically, it is probably more important that the vast majority of Hungarians (78 percent) consider it justified even in retrospect that there has been an emergency situation in Hungary “enabling a special legal order” for the past two months (17 percent disagree). Even 50 percent of government critical voters agree that the move was justified. All those crying “dictatorship”, George Soros, Jean-Claude Juncker, Donald Tusk, the liberal world press and the Hungarian left-wing opposition in particular have lost an important battle of interpretation.  The vast majority of Hungarian voters did not once agree with them on any aspect of the situation, standing in unison on the issue of announcing the state of emergecy and then calling it off.

To be aware of this is also important because 62 percent of those surveyed said the coronavirus would make a second wave in Hungary, with government critics even more confident (70 percent) than government supporters (57 percent). Should this become a reality, the Hungarian opposition will have the opportunity to learn from its mistake and next time assist rather than oppose the special measures necessary for defense – in addition to offering an apology as previously proposed by Viktor Orbán.

The public opinion poll was conducted by Nézőpont Intézet between 21-23 May 2020 based on telephone interviews with 1,000 respondents. The sample is representative of the 18+ population by geneder, age, region, settlement type and level of education. A sample of 1,000 at 95 percent accuracy has a margin of error of 3.16 percent.