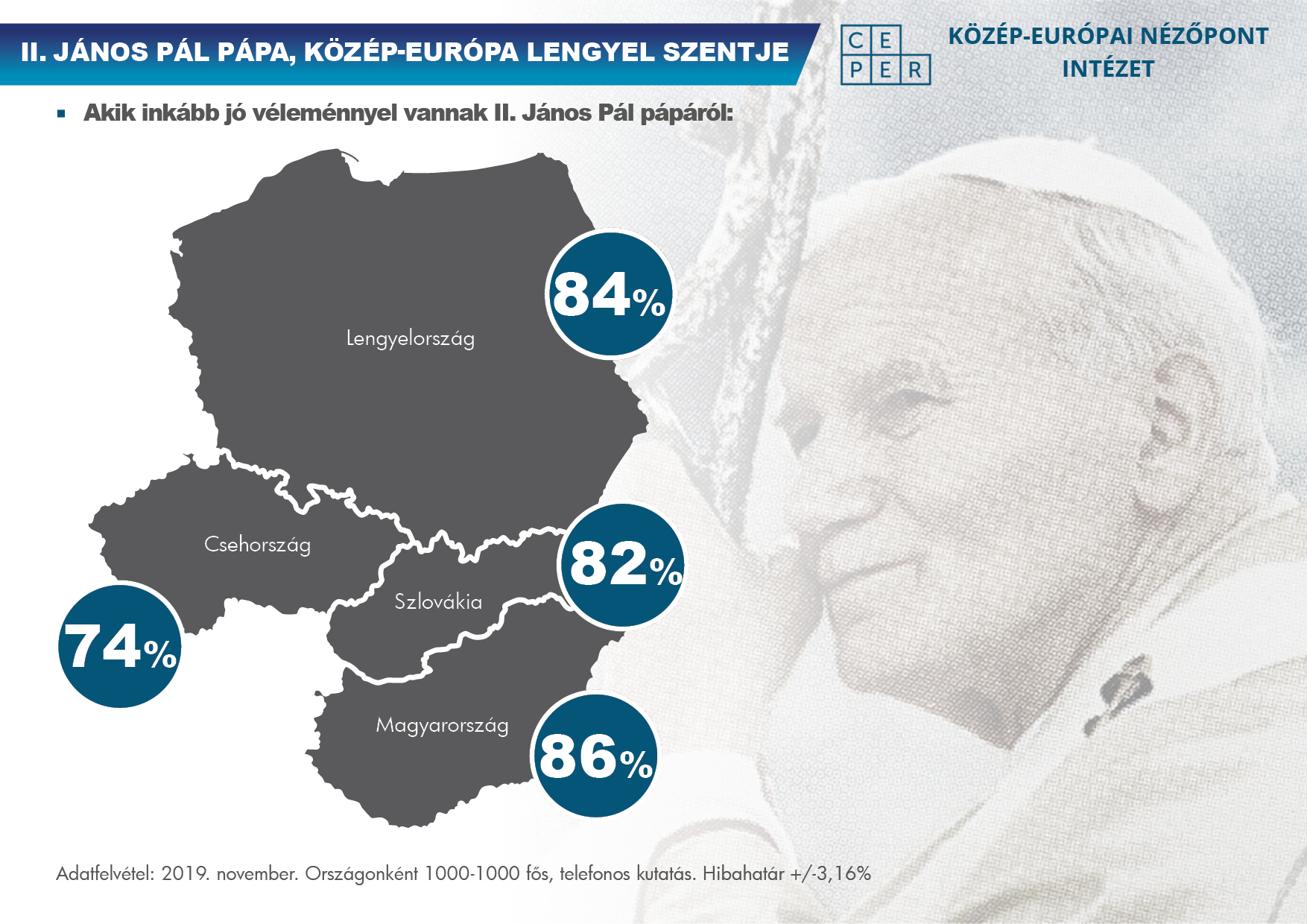 Karol Wojtyła, or Pope St John Paul II as the world knows him, was born one hundred years ago on May 18. So far the sole Polish pope of the Roman Catholic Church, he is the object of unparalleled veneration in the region: at least three-quarters of the population of all four Visegrad states continue to hold him in high regard even today. The Central European pope is now a Central European saint, and his lasting popularity may also be due to the special attention he had paid to the region.

According to a survey conducted by the Institute of Central European Perspectives, the Pope, who would be 100 years old this month, enjoys enduring fame and popularity among the public in V4 countries. Only 3 percent of respondents in the four countries said they had not heard of him. His 26 year long governance of the Church may have played a key role in his visibility, and yet it is also somewhat surprising, as his person, deeds and overall legacy have received less attention in recent years.

Much like his visibility, Pope St John Paul II’s popularity also ranks high: more than four-fifths (82 percent) of the populations of Visegrad countries have a favourable opinion of him. Data for individual countries do not show much variance. Citizens of Hungary (86 percent), Poland (84 percent) and Slovakia (82 percent) do essentially share the same opinion. Only the highly secular Czechia, where 51 percent of respondents described themselves as non-religious, lags slightly behind. Accordingly, the 74 percent popularity among Czechs is considered to be particularly high.

The data reveals no significant variance in the breakdown by age group, settlement type and education level. Pope St John Paul II is known and respected among young people, and particularly in Poland, his popularity is highest among those under 30 (87 percent). They were certainly far from being adults when the pope died 15 years ago.

Such high popularity certainly has more than one reason, from religious teaching through personal authenticity to a reputation established through the use of modern communication tools.  There are, however, even more and deeper reasons behind the outstanding Central European figures. The Polish pope is not merely a Central European saint, but also a saint of Central Europe. He used his office to fight communist totalitarianism and paid special attention to his wider homeland in the “free world”. He visited all Central European countries and formulated his words of encouragement and caution with a sharp foresight into the future.

In 1991, on the 100th anniversary of the Social Encyclical of the Catholic Church, he wrote: “The events of 1989 took place mainly in the states of Eastern and Central Europe, yet they are of universal significance because they have good and bad consequences for the whole human family. These consequences are not merely mechanical or fateful, but rather opportunities offered to human freedom to cooperate with the intentions of a merciful God in history.” (Centesimus Annus)

In 2005, in a late conversation he sought what Eastern Central Europe could do to shape a united Europe, stressing that “the most important contribution that the countries of this region can offer is the protection of their own identity. The biggest danger Eastern Europe is exposed to is the confusion of its own identity […] And this danger lies in taking on the negative cultural model prevalent in the West without criticism […] I think there has been a great intellectual struggle going on in recent times, the outcome of which will define the face of Europe. ” (Memoria e identità) His thoughts are still valid fifteen years after his death.

The Institute was established in 2018 under the name CEPER Central European Perspectives Ltd and, in close cooperation with Nézőpont, it aims to produce surveys and analyses introducing Central Europe and comparing countries of the region for its clients and the public.

The telephone interview based (CATI) survey took place in November 2019 in four Central European countries (Hungary, Poland, Czechia, Slovakia) involving 1000 respondents in each. The sample is representative of the 18+ population for gender, age, region, settlement type and education level. In the case of a sample this size the maximum margin of error is 3.2 percent.