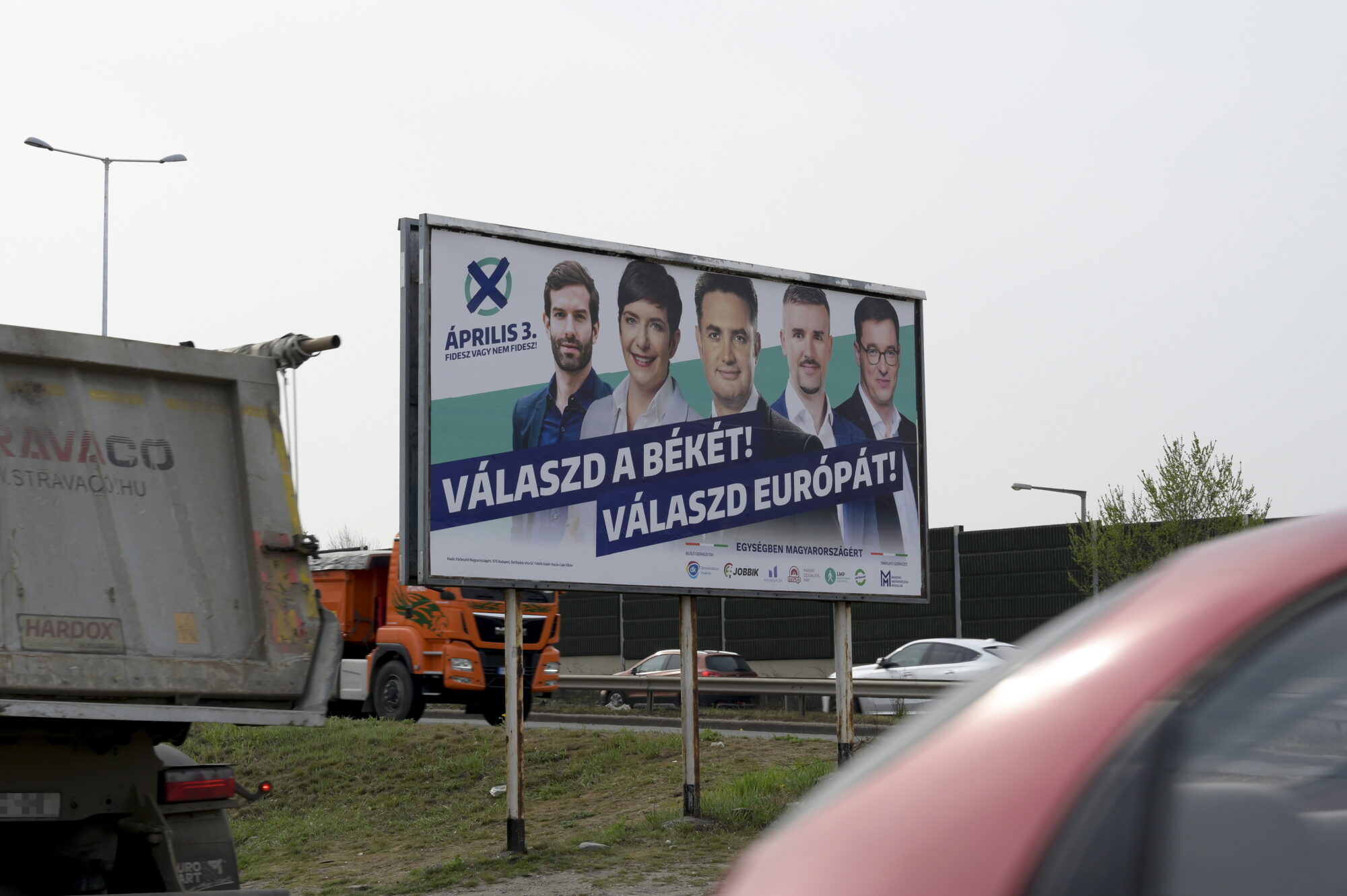 A recent survey of the Nézőpont Institute reveals that according to the majority of active voters, both Péter Márki-Zay and Ferenc Gyurcsány are responsible for the left’s electoral defeat. The same proportion of respondents think that both politicians are responsible (57 percent), but the degree of responsibility (on the scale of 1 to 5) is considered higher for Gyurcsány (3.9) than for Márki-Zay (3.4). Even among left-wing voters, the Democratic Coalition president is considered responsible to a greater extent (3.4) than the mayor of Hódmezővásárhely (3). 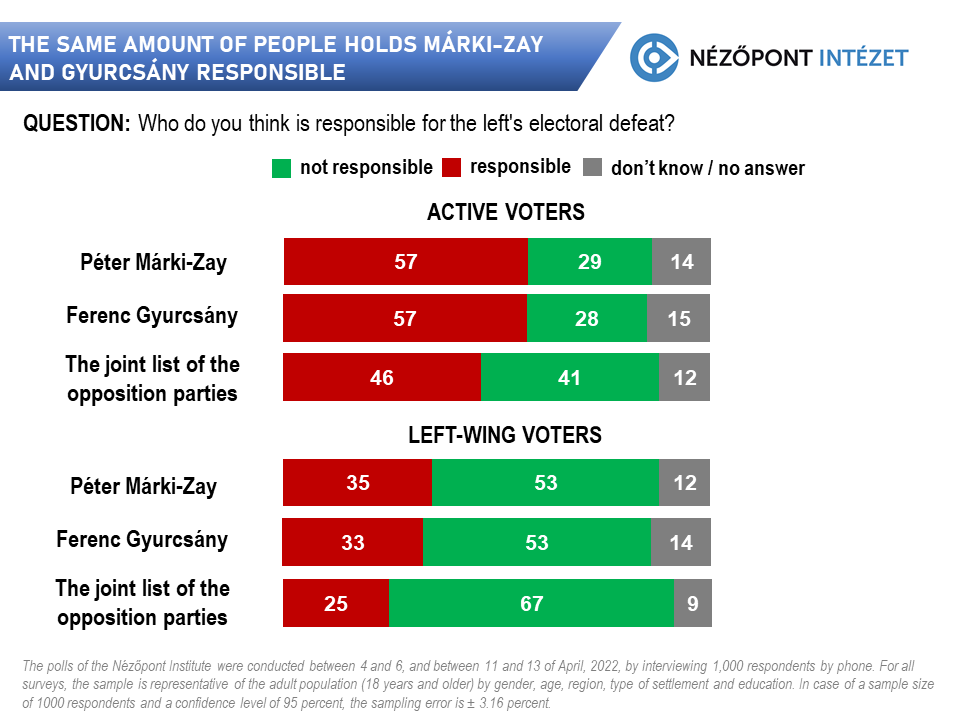 According to a poll by the Nézőpont Institute, nearly three-fifths of active voters (57 percent in both cases) consider Ferenc Gyurcsány and Péter Márki-Zay responsible for the historic defeat of the left. Only 28 percent do not hold the president of the DK (Democratic Coalition) and 29 percent do not hold the leader of the left-wing list responsible for the opposition’s defeat. Both among active voters (46 percent) and left-wing voters (25 percent), the joint list of the opposition parties was blamed less than the person of the two politicians. 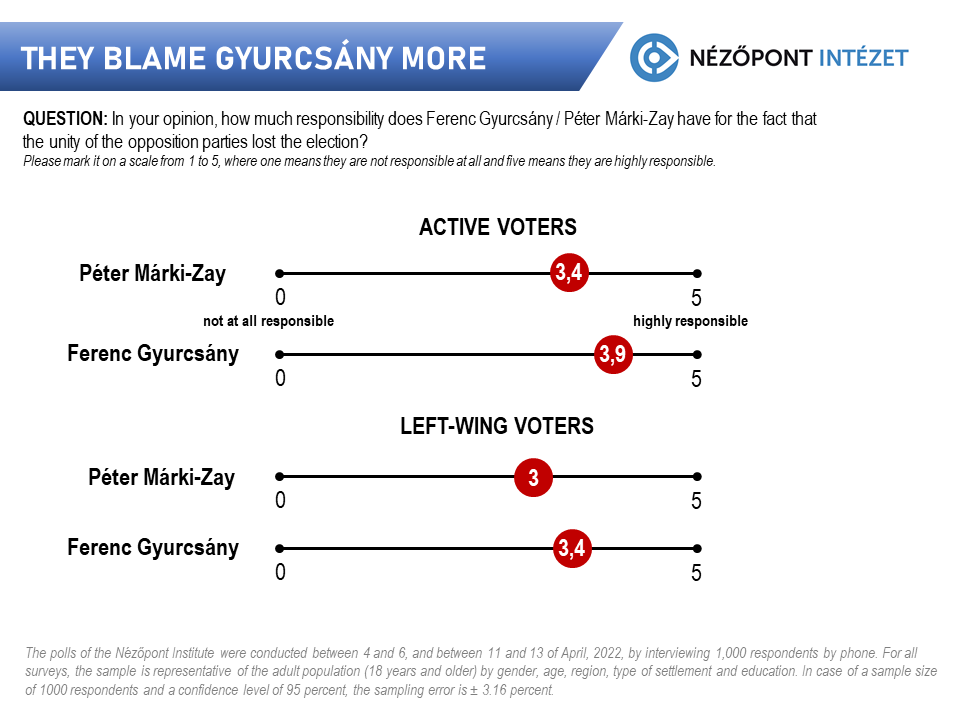 Although both of them are considered to be responsible in similar proportions, Hungarian voters’ opinion differs regarding the degree of responsibility. On a scale of 1 to 5, where 1 indicates “not at all responsible” and 5 indicates “highly responsible”, active voters rated Péter Márki-Zay’s role in the defeat at 3.4 on average, and Ferenc Gyurcsány’s at 3.9. Left-wing voters also think that the president of the Democratic Coalition is more responsible for the defeat, with his responsibility rated at 3.4 while the mayor of Hódmezővásárhely at 3.

The aforementioned polls of the Nézőpont Institute were conducted between 4 and 6, and between 11 and 13 of April, 2022, by interviewing 1,000 respondents by phone. For all surveys, the sample is representative of the adult population (18 years and older) by gender, age, region, type of settlement and education. In case of a sample size of 1000 respondents and a confidence level of 95 percent, the sampling error is ± 3.16 percent.