István Tarlós is leading convincingly the mayoral race while joint left-wing candidate Ferenc Falus is currently unable to beat even Lajos Bokros, according to Nézőpont Intézet’s telephone opinion poll conducted on a sample of 1000 between 7 and 17 September.

The survey has revealed that Fidesz-KDNP candidate István Tarlós would collect votes from 38% of all respondents in local elections. Modern Hungary Movement mayoral candidate Lajos Bokros currently ranks second with 12% of sympathisers, while Ferenc Falus supported by left-wing parties could only get 8% of votes. Antal Csárdi (LMP) and Gábor Staudt (Jobbik) are each supported by 3% of sympathisers.

Based on the potential voting base most likely to predict the results, István Tarlós now has 50%, Lajos Bokros 14% and Ferenc Falus only 11% of the votes. A further 9% is made up of left-wing sympathisers who have not yet decided which candidate to vote for; their votes are expected to be divided between Bokros and Falus. On that basis, both the LMP’s and Jobbik’s mayoral candidates are supported by 7% of sympathisers, while the other candidates would get 2% of votes.

Overall, Fidesz has a convincing lead, also according to party preferences, which basically results from the division of left-wing voters. 32% of all respondents are Government party sympathisers, 10% support Együtt-PM and 9% LMP, while 8% would vote for MSZP and DK each, with another 7% supporting Jobbik in Budapest. Adding up the number of MSZP, DK and Együtt-PM supporters, it can be seen that Fidesz is entering the finishing stage of the local elections with a narrow advantage in the mayoral race in Budapest. From this aspect, due to relatively equalised party preferences, the 12 October vote cannot be regarded as a no-stakes contest. The district mayoral elections will have an extremely large part to play. However, it can be in favour of Fidesz, which has the most district mayors, that 65% of all respondents are satisfied with the performance of the current mayors of their districts. 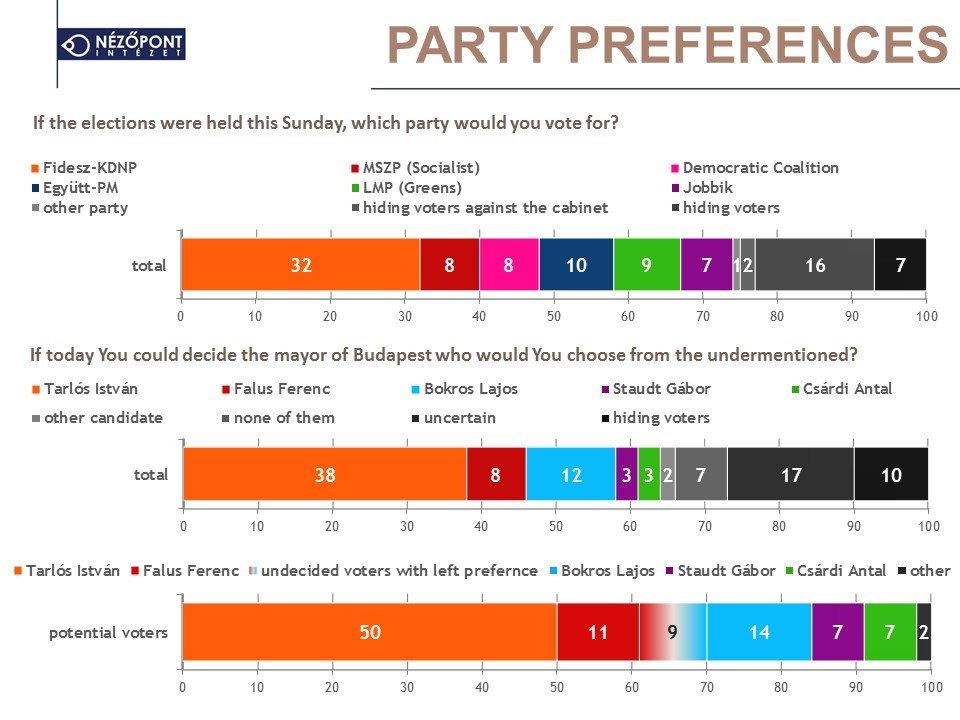