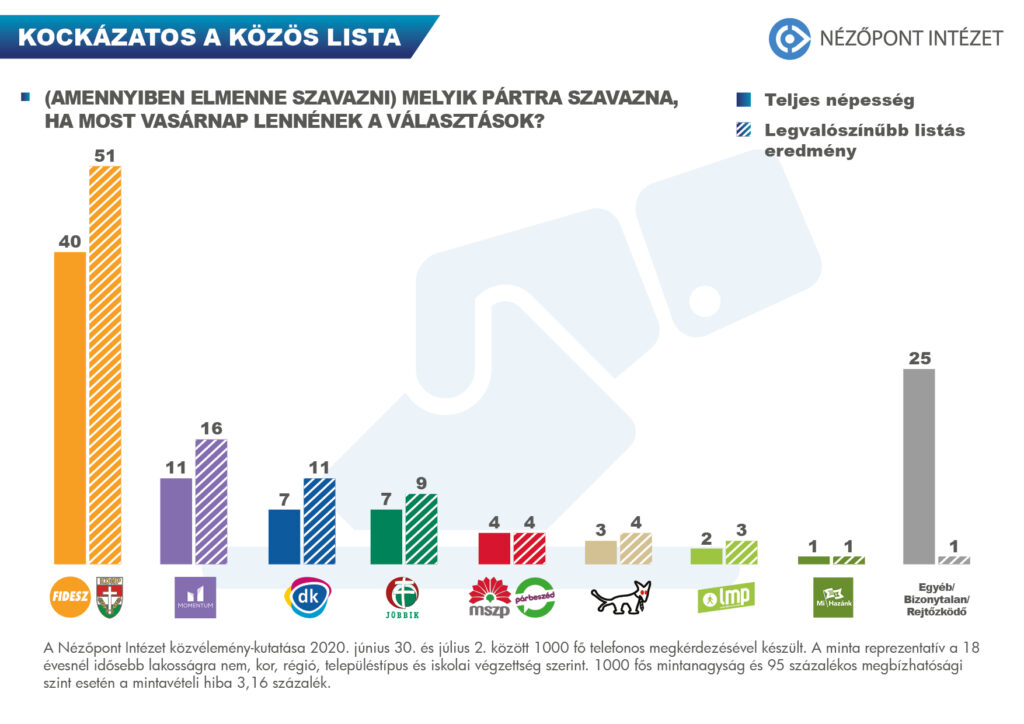 Should opposition parties run separately, Fidesz KDNP would gain 51 percent in an election held this Sunday. In the case of an opposition joint list also including Jobbik and the Democratic Coalition, however, government parties could reach as much as 56 percent,  reveals a nationally representative public opinion research poll conducted by Nézőpont Intézet.

Shifts within the margin of error occurred from June to July in terms of party preferences. With the decline of the first wave of the coronavirus, the popularity of Fidesz-KDNP has returned to the level seen in the beginning of 2020 with government parties currently standing at 51 percent among active voters. In addition, power relations on the opposition side are becoming clear: Momentum Movement has become the leading force reaching 16 percent in an election to be held this Sunday while the Democratic Coalition would reach 11 and the Jobbik 9 percent. According to last week’s survey, only these three parties would reach the entry threshold on their own “ this Sunday”. The MSZP-Dialogue alliance remains at below 5, and the Two-Tailed Dog Party at 4 percent. The LMP would get 3 percent showing minimal improvement, and the Our Hungary Movement would get 1 percent.

All this means that opposition parties  that nominated joint candidates in the municipal elections (Momentum, DK, Jobbik, MSZP-P, LMP) stand at 43 percent in total. However, in a theoretical situation where the Fidesz-KDNP and an opposition „joint list” were the only options, 56 percent of active voters would vote for the current ruling party, while the opposition would get 30 percent (confirmed opposition voters) and a further 11 percent can be projected. The remaining 3 percent would not vote under these circumstances.

The withdrawal of the “coalition” ranging from Ferenc Gyurcsány through Péter Jakab to András Fekete-Győr would be a relative advantage for Fidesz, against which the mobilisation of inactive voters would be the opposition camp’s only way of defense. However, debates over the “joint list” in the summer heat may be dangerous for the opposition for other reasons as well since a new pole may be formed to address the dropouts – as was the case with the Centrum Party in 2002 or with the MDF in 2006 – and this would also bring the completeness of such list into question.

Finally, it is also against the “joint list” that the parties making it up risk their individual identity and future as well. As they cannot form their own faction in parliament in the event of a joint launch, they may also become redundant after 2022.

The public opinion poll was conducted by Nézőpont Intézet between 30 June and 2 July 2020 based on telephone interviews with 1,000 respondents. The sample is representative of the 18+ population by gender, age, region, settlement type and level of education. A sample of 1,000 at 95 percent accuracy has a margin of error of 3.16 percent.